The cat came back the very next day

My life as a dj is over. I like it. I've needed the sleep.


In other, and I think more interesting, news:

We have a new cat. Well, sort of. The thing is that about a month and a half maybe two months ago our big grey cat Samson slipped out of the house somehow and he never came back. Well, we were heartbroken and we'e consoling ourselves with the thought some old lady in our neighborhood has taken him in and he's living the high life. In the mean time, I've been looking at all the poor little strays in our neighborhood with an increasing amount of sympathy. Kitten keeps telling me I can't feed them all. And then this one shows up in our back yard: 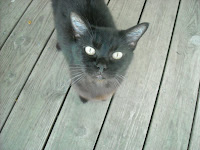 He was way worse looking at first. He had scratches and scabs all over him and he was way skinnier and looked half starved. His size though, we figured he's only about a year old. Well, I begged and pleaded for Kitten to let me feed him because I'd been calling to him out the back window for half an hour and he wasn't running away. She let me, so I took out a bowl of water and some food for him.

Rather than running away though, he dashed up and started crying at me. He rolled over immediately and let me pet him. Kitten came out and he was rubbing on her too. After we pet him he ate and he's stuck around. He was staying under our neighbor lady's tree but he's moved onto our front porch.

Over the last two weeks he's gotten fatter, and sweeter and he's healing up and starting to look like a healthy, normal cat. At first Kitten swore he was never to come in the house, but she's already making contingency plans for the winter time, so he doesn't freeze. She's even gone so far as to say if I want to risk it I can bathe him.

When she broke down and bought outdoor cat food for him and started making reference to him as our cat, I knew we had a new family member. 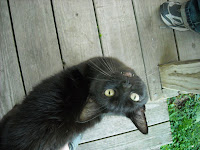 Congrats on the latest family member. It's funny...a lady I work with has a cat named Jinx too. They call her Jinxy.

It sounds like you've been claimed by a very sweet little friend.