I am writing our history on the bedroom wall

Right. So I've spent a week being completely negligent about the blog, and I'm sorry about that. I got distracted. We've been nesting in the most nesting way possible.
Kitten and I have been remodeling the bedroom in our sweet little house. It sounds like it wouldn't be that bad really. We had three days of Kitten off work and our darling friend Guitar Hero over to help us. (By the way, that girl has grown on me. Not even grown - She's adorable, there's no not loving her.) Anyway, so it sounded like a simple plan, right? Tear out wall, put up insulation, put up drywall, install new windows, spackle and paint, in goes the new ceiling fan and you have an awesome bedroom. Right?
I'm betting you can guess its never that easy. You know, having worked in the construction field, I should have known it wasn't that easy.
Last Monday was hot as hell and Guitar Hero got over to the house about five or so. I had a raging migraine and was instructed to lay down and then later cook dinner if I wanted to be helpful. The girls didn't want me wearing myself out. Slightly off-put at the thought of being treated like a delicate flower, I lay on our bed (now in the living room) and pouted till I fell asleep. I woke feeling much better, cooked dinner and planned on being massively helpful the next day.
Tuesday Guitar Hero had school and I worked until three. After we got started on tearing out more walls. It was awesome. Kitten had to go pick up a bunch of stff from the hardware store, so Ifelt like I was really helpful that night. We had an easy dinner and then drank some brandy and root beer that Guitar Hero brought and played poker for a until about midnight.
Wednesday we put in one new window, ripped up the carpet (which was toast and had to be thrown out, because of all the crap in it from demo) put up roofing felt and then put in the new insulation. That was a hell of a night. It got really hot in the room because of the insulation, I imagine it will be awesome in the winter.
A shot of whisky, more poker and we went to sleep.
Thursday we changed the outlets in the bedroom and reached an impasse, the floor is sinking in one spot (the house is quite old, built in 1921 or so) and we have to jack up the floor before we can do anything else so we haven't made it any further. It looks as though we might be in the living room for another week before we can get it done. Guitar Hero left for St. Louis on Friday to go do a mural for some rich lady's house (she's an artist) and we are eagerly awaiting her return. Not just because she'll be a huge help, but because we honestly miss her.
Work for the rest of the weekend was dull. Its hot as all hell right now and the air conditioning is off, because we can't bear to waste the money running it with the bedroom unfinished and leaking air out all its surfaces. I worked on refinishing the floor today but it looks as though we'll have to put new hardwoods down, the old ones have been completely destroyed by the previous owners. Even if i could get all the paint and muck up off the floor and sand it, there are areas terribly pock marked and it'll be cheaper, and a better investment, in the long run to put new ones in.
The plan for painting is lovely. The ceiling is going to be a sky blue, the walls a lighter blue than that, with two colors of large pink shadowed dots on it, with the darker blue dots as accent. I'm sewing a tapestry to create a false wall along one side for privacy when we have guests, as the only bathroom is adjoined to the master bedroom. It'll be nice when its all finished, I dare say.
In other news, Jinx has a new friend. I'll have pictures of him up shortly, I am sure. He's a giant yellow tabby that we've seen several times before. He doesn't want to go away and no amount of shooing or jinx growling will remove him from our porch. Yesterday he climbed all over me, and allwed me to pick him up. I discovered he has no front claws, and it amazes me that so many people will neglect and throw out animals when it is convinent to them, with no thought of how it will hurt the poor animal. This morning I found the both of them on the porch, Jinx on the little towel we've laid out for her to cuddle, the other on our porch swing. They've passed the afternoon in peace, and I assume they've resigned themselves to eachother;s company. We named him Weasley, and he's a swet cat. Lord, we're pushovers when it comes to animals.
Kitten plans on using all our leftover hardwood to build them a kitty condo for the front porch so they have somewhere to sleep when it is cold and wet. Bless her, and she was so adamant about not feeding the strays a month ago....
Anyway, that's my distractions for the last week. i've got some pictures as proof of my industry, below.
Hope all's well for you. And hopefully not as hot as we are here.
Lovins'
AG/xx 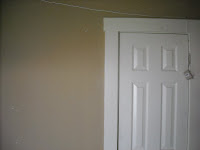 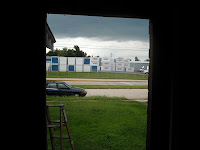 The window out, and rain clouds approaching, don't be fooled. It was still hot. 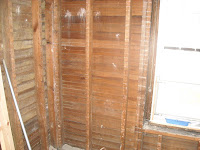 The walls after being torn out. There was drywall and slats behind it, so it took a while. 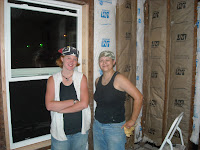 Guitar Hero (left) and Kitten (right) in front of the newly installed window, insulation in the background. 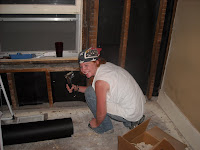 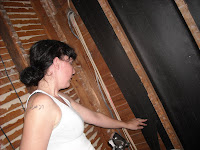 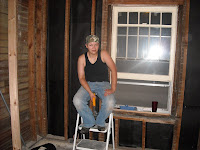 Kitten, resting herself in front of the lovely new window, and looking cute doing it. 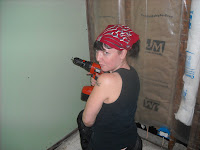 You are my heroes. When you're done there, you can come here and redo our two bedrooms. It's much cooler here, I promise! *G*

I like DIY projects but haven't done anything this elaborate on my own. Definitely not ripping out windows and replacing them! I can't wait to see how it turns out.

Poor yellow kitty. When people treat animals that way I swear I want to hunt them down! I'm glad your two furry companions are beginning to get along. Let's see a pic of the kitty condo when it's done too, please. :0)