Hmmm. This has been a good week. Kitten was sick earlier in the week and Igot a chance to play nursemaid, which I'm alright with. I liked taking care of her. And she's feeling a lot better, which is good. There's been some sort of chest conjestion sore throat stuff going around. Thank heavens i didn't catch it.

We took our Kitten Delyla to the vet this week to get fixed. She's a lot sweeter right now. I'm not sure if its a change in her personality or if she's just tired from all the painmeds. Her and Samson (our other cat) have been super cuddly. Now that they're both fixed they are allowed back in the bedroom so I've been waking up to kitty sleeping on my feet and on our pillows. Lyla likes our feet but Samson seems to think he needs to sleep on our pillows with us. We have a special pillow just for him now. Its cute.

We had more tornadoes this week too. Wesnesday night. We had a few last week (I think I mentioned them) but this time we actually had it close enough to us we drug all the cats and pillows and blankets into the bathroom and hid out with the radio. (We don't have a basement) It was a little scary. Kitten is really afraid of tornadoes so I found myself in the relatively new position of being the brave one. I liked it, as far as you can like comforting your partner while you lay in the floor and hope that a massive storm doesn't come and destroy your house, or worse. We got off easy. No damage, thank heavens. There were two separate touchdowns inside our city though, which is unusual. We live on a plateau so normally the storms go around us and hit the surrounding cities in the lower areas. I'm not so much afriad of them as I am annoyed that they wake me up and risk damage to the house. My mom's second husband (2.0) was a tornado spotter so I outgrew my terror of them when I was younger. I'm not sure its a great thing to not be afraid, but it does help me keep a level head when the fur starts to fly, as it were.
My schedule changed this week and I totally forgot about it so I missed my shift at work on Wednesday. I felt terrible about it but it ended up landing me with two days off in a row, something I haven't done since last summer when rogue and I went on our vacation thingy. It ws nice. Kitten and I went on an actual date and I had a chance to spend a little quality time with her. She's finished up with school for the semester so we'll get to see eachother more. (Hence the reason I changed my schedule. I wanted to sync our days off)
Yesterday we woke up early and went on a mini road trip to Eureka Springs Arkansas. Its only a few hours away from us and its a cute little town. Kitten had never been before so I was happy to show her a place that I love so much. We walked around town and looked at the springs and did a little (completely unneccessary) shopping. By the time we made it back to the car I had a new skirt and swimsuit. Kitten had a new t shirt and pair of shorts and we bought Blackberry Jam, an Awesome spicy buttrubb for grilling and a raspberry chipolte sauce I think will go great on pork chops, if I don't eat it on wheat thins first. We also bought about a pound of hand pulled salt water taffy, and a bunch of chocolate coated fruit, which we feasted on right out side the confectioner's shop.
We had dinner at my favorite restaurant in town, Local Flavor, and watched people pass by. (You can eat outside on a balcony, its so cool, because its next to a trolly station) Once we stuffed ourselves stupid we drove back home and continued our marathon of the L Word. We're rewatching it starting with the first season of the L word.
I was really pleased. We spent over four hours in the car together and we didn't have to turn on the radio once. I was able to tell her all about the funny things I remember from all the little towns on the way. We stopped at a gas station about a quarter of the way in and I found tootsie drops, which i haven't seen in ages and I love them.
The companionship is nice.
More pics for you to look at. 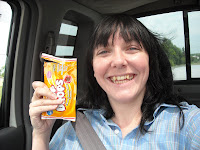 Me and my beloved tootsie drops. Found them in a gas station in a little town about halfway there. 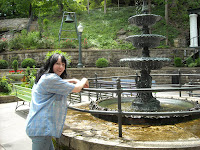 Me at one of the springs in town, I don't remember the name. But they turned it into a beautiful fountain. 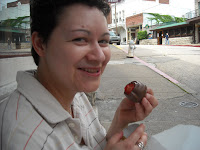 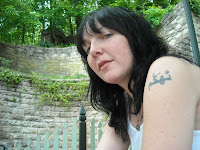 Me smoking outside the sweet spring. 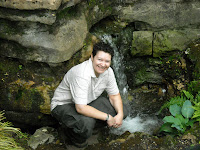 Kitten at the sweet spring.
Posted by Alecya G at 7:30 AM

Wow, it sounds like a great week overall, w/ the exception of poor Kitten's illness. I'm like you, not terrified of tornadoes. I lived in Dallas and had one go over my school while I was in it. I respect them, but find them exciting as well. :0)