Yesterday was my day off. It was glorious. I went to the zoo with Kitten. She hadn't been for about ten years so everything was new to her. I love zoos in general so I had a seriously good time. It felt nice to be outside and enjoying the sunshine. I was a little disappointed, the elephants were already inside for the day because we went late in the afternoon. And the giraffe feeding deck was closed. (If you've never fed a giraffe and get the chance, do. Its so much fun) But the animals were really active because the weather was mild and we got to listen to the mountain lion scream for a while. That was cool. The otter had babies again so we'll get to see them sometime this summer. Otter babies are so cool.

Speaking of babies, I don't know if I mentioned Spike before. We have a groundhog that lives in our back yard. We always laughed at it because its about the size of a terrier. I named it Spike. Well, I was looking out the window of our laundry room and saw a groundhog that was too little to be spike. Then I saw three more. Then I saw Spike. Apparently, she's a momma groundhog. They's adorable. Kitten says I shouldn't feed them (I won't though I want to) and she's probably going to call the conservation department to relocate them to a safer habitat. I'll be sad to see them go. In the meantime I'm hiding with my camera every chance I get so I can snap some pictures of them.

Cinco de Mayo passed with relatively small incident at my work. I was exhausted by the time I got off. Eleven hours of drunk crazies, margaritas, radio road shows and panicked coworkers was enough for me. Now only mother's day to tackle and life should be really good. And easier.

Went on Monday to the travel agent to pay another thousand down on the trip in November. I'm really excited. Kitten and I are going to have so much fun! She's been more recently than me so we'll both get a chance to show eachother new things while we're there. So happy. 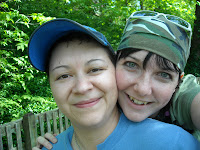 Me and Kitten together. 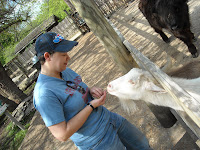 Kitten feeding the goats in the "contact area" (so much for petting zoos.) 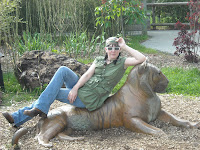 Me with the tiger statue outside their exhibit 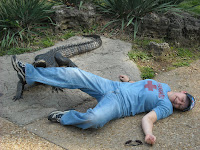 Kitten outside the reptile house, losing a fight with the gator statue. 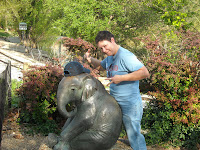 I thought this was just too cute for words. Its my favorite statue in the whole zoo. 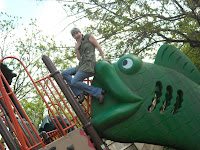 Yeah, I play onthe playground equipment, what can I say? I'm a huge kiddo.
Posted by Alecya G at 8:43 AM